About Zafron On Brunswick

Book Direct with the Owner at Zafron On Brunswick with Pubs and Clubs in New Farm Australia for all your restaurant and Food Reservations.

Zafron on Brunswick was opened in May 2007 by Chef Fay (Farideh) Knopf. Chef Fay has worked in traditional Italian and French cuisine for over two decades and  designed her restaurant with a Euro-style approach to her native Persian cuisine. To diversify the menu, Chef Fay also offers some traditional and modern dishes from around the Mediterranean, including Italian, French, Greek and Moroccan flavours.

Chef Fay is assisted by her husband of 29 years, Michael Knopf. Michael is an award-winning  composer and concert/jazz guitarist. Running the front-of-house Michael aims to compliment Fay’s efforts by providing an easy going and friendly atmosphere. Chef Fay often remarks that she wants her guests to feel like they are safe at home, with a lovely meal provided by family. 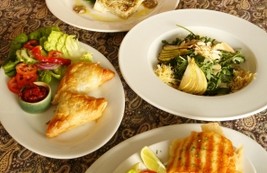 Pubs and Clubs welcomes Zafron On Brunswick in New Farm QLD 4005, we provide a friendly relaxing restaurant and bar.  Zafron On Brunswick is a great place to unwind with a cold drink, an ideal place to watch and forget about the hustle and bustle while you enjoy a freshly brewed coffee or a snack from our affordable specials menu.

Is Zafron On Brunswick in New Farm your property on Pubs and Clubs, please claim your listing and subscribe to update your contact details and receive your phone calls and emails from your clients.